Depression affects over two million people 65-plus; learn how to identify the signs, and how to get help.

Your husband might be depressed, and you might not know it. Or, maybe it’s your sister or your mother.

Maybe it’s even you.

Even though upwards of two million Americans age 65-plus experience depression, the majority of seniors—68 percent, according to a National Mental Health Association survey—know little about it. One big reason is that signs are easy to overlook, since they’re frequently confused with other ailments and changes that come naturally with aging.

“Often in older adults, when they’re depressed, you don’t see high levels of crying and sadness you might see in a younger adult,” says Dr. Sarah Yarry, Ph.D., a Licensed Clinical Psychologist specializing in gerontology. “You see it more often as withdrawal. It’s apathy, hopelessness, loss of appetite and interest.” Older adults regularly demonstrate physical symptoms, as well—particularly aches and pains—and when they’re not addressed along with the underlying neurological issues, depression is more likely to linger, and more likely to come back.

Depression comes with serious personal costs, too: It’s correlated with a higher risk of dying early from certain illnesses and is a major factor in suicides. That’s why it’s imperative to recognize the signs—even the lesser-known ones—before it’s too late. Here, then, are some common, but little-known indications of depression in older adults.

1. Joint and back pain

As we age, some pain is to be expected, and it doesn’t have to come with depression. That said, the connection between pain and depression can’t be ignored—especially if the pain is chronic, meaning it lasts more than a few months. Back aches and joint pain are commonly reported signs. One 2015 study in the journal Arthritis even found that about 12 percent of those with hip or knee osteoarthritis were depressed, versus about 6.6 percent of the general population. What’s more, “each additional symptomatic joint was associated with a 19 percent increase in the odds of self-reported depression.” Research shows that pain and depression is a chicken-egg scenario, too; the discomfort contributes to the depression, which can then intensify the agony. Physically painful illnesses, from stroke to multiple sclerosis, can exacerbate depression, too.

While our mental abilities are expected to decline somewhat with age, depression can do a number on memory, focus, attentiveness, and even speech and movement. In fact, one small 2004 study found that more than half of participants suffering from late-life depression had significant problems with processing information and executive function (decision making, reason, etc.).

This mental cloudiness is frequently confused with dementia. As opposed to a degenerative condition like Alzheimer’s, however, “The confusion comes from lack of energy and apathy,” says Dr. Yarry. “It takes so much effort with them because they’re depressed.” This makes diagnosis crucial, since treating depression can improve sharpness.

Depression apparently makes surviving coronary disease more difficult, too; depressed heart failure patients, for example, are four times as likely to die early. Part of this may be chemical, part if it is because depressed people may be less motivated to take good care of themselves. Either way, chest pain like angina can be an indicator of depression.

In addition to melancholy, older adults suffering from depression may express grouchiness, increased anger, or even open hostility, all of which can be magnified by the use of alcohol (also tied to depression). Part of the reason for this is cultural. “It’s more appropriate to express depression as irritability rather than sadness, because that’s what’s acceptable in that generation,” says Dr. Yarry. “It’s the accepted way of expressing emotion.” Other feelings that might indicate depression: Increased fear, anxiety, guilt, and loss of hope.

Though it’s not widely known, there’s a strong, long-established tie between senior depression and headaches. For example, in 1999, the journal Pain published a survey of 1,421 Chinese seniors that found those with frequent, severe, or migraine headaches were likelier to be depressed. Migraines are especially correlative; a 2008 study of migraine patients aged 50-plus discovered that nearly half showed “mild-to-moderate depressive symptoms.”  Like joint and chest pain, depression may exacerbate headaches, while headaches can contribute to depression.

As we age, we internalize our psychological issues in more ways than one, and depression may have some pretty serious effects on our guts. Nausea, constipation, and digestive problems are common, as are appetite and weight changes. Depressed older adults may drop pounds and slow their eating overall, though some may go the other direction and gain weight, too.

If you suspect someone you know is suffering from depression—or you, yourself are experiencing symptoms—see a medical professional as soon as possible. “Bring them to a family doctor and get an evaluation,” says Dr. Yarry, who also suggests seeing a mental health expert whose focus is in treating older people. “Talk to a geriatric psychologist that specializes in depression issues.”

For more information about depression and older adults, consult one of these resources—and remember that there’s always help.

When There Is No Hope, There Is HOPE!

“‘For I know the plans I have for you,’ says the Lord. ‘They are plans for good and not for disaster, to give you a future and a hope.'”

Dealing with the consequences of a loved one’s problem creates a mounting pressure within us. We want to take charge and fix things – but we can’t. This kind of pressure leads to overload. And what does an electrical circuit do when it is overloaded?

It burns out, creates a hazard, blows a fuse, or starts a fire.

Like circuits, we also burn out with overload. We can’t function. We can even be a danger to ourselves and to others. Our health can suffer.

How about you? Do you see any of these overload signs in yourself? You may be tempted to hold in the pressures, the stress, and the pain – but if you do, the overload can do some serious harm in your life.

The feelings of pressure are real and can seem overwhelming, but never believe the lie that your situation is hopeless. In the middle of the pain and frustration, you need to believe there is hope.

We are not talking about the kind of hope that halfheartedly says, “I hope things start looking up,” or “We can only hope for the best.” We are talking about the kind of hope described as confident expectation of something good. Hope based on your knowledge of God and His willingness to meet you right where you are. He loves you. He cares. And He is ready to work in you and in your difficult circumstances.

Meditate on the above scripture. God has a plan for you – a plan for your good. His plan will not harm you. He wants you to have hope and look confidently toward the future.

Are you ready to lean on him? To trust him? With him, you can have real hope.

Father, I haven’t been able to see anything but this problem. It has consumed me and destroyed my hope and my joy. But now I am reminded you are still with me. You want to help, and you are more than able. Help me shift my focus to you. To your power, your love, and your good plan for me . . . and for my loved one. In Jesus’ name . . .

These thoughts were drawn from … 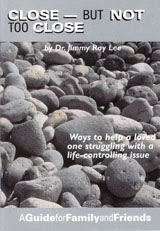 Close—But Not Too Close by Dr. Jimmy Ray Lee.